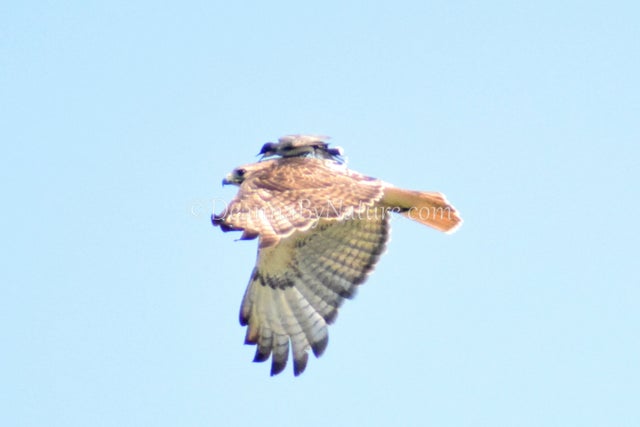 In Celtic Folklore, there is a story called How the Wren became King. A story of a tiny wren that challenged and outsmarted the eagle to be King of birds. The story is in the link below.

While in the marsh the other day, documenting the growth of the red tail hawk chick, I witnessed the Wren and the Eagle story marsh style! The red tail parents holler most of the time, letting the chick know they are there. It could be because of me as well, but I hear them well before I get halfway to the marsh. As I stand observing and listening, the hawks are in the distance but I can't see them. But that day, after I announced that I was leaving and thanked the marsh, the hawk flew into my view. I snapped a few pictures between the big trees. I slowly moved to a more open spot by the water edge. Then I saw a flutter and heard the hawk screech. I snapped more pics. Suddenly, the hawk screeched and took off and the bird did as well. The scene that followed was incredible, I didn't know if the pictures would be good but you can see the story unfold.

I thought of the Wren and the Eagle story. I assumed the little bird was one of the swallows, to my surprise, it was not. The black and white bird is an Eastern King Bird. My heart is so raw right now, tears for our fellow human beings fall daily. I analyze my past to see what actions I may have done, unknowingly, that has added to this current climate. Experiencing this wildlife event has given me such hope. I feel so very strongly that the hawk is representative of racism/white supremacy, so large and powerful. The King Bird, a determined protective creature, whose colors amazingly are black and white.

The King Bird chased that hawk in relentless pursuit. Riding its back and pecking away at the creature that is such a threat. My raw heart is so hopeful, I know THIS moment in time is the most important in my life. I'm watching love in action as there are protests, people finally beginning to listen and people coming together. There is so much more to do. The King Bird says don't give up, keep love in the forefront of every action, every thought, every decision. We are One. One People. One Race. One Love. Peace.

When hawk visits, it's a reminder to rise above whatever situation you're struggling with. Look at it from above, distance yourself and look at it from a new perspective. When you see what you need to do, swoop down and take action!